Today’s activity was designed to target the surface area & volume expectation in my MFM2P course. I’ve done this one a few times in the past.

This time around I started by asking them to guess whether or not these two boxes had the same volume (I told them they both hold 12 cans – which is also written on the box): 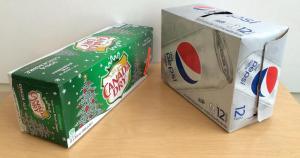 Over half of my students said NO – they were not the same volume. I sent them to their boards to check whether or not they were right. The volumes turned out not to be exactly the same, but we discussed that if we measured in cans, they both had the same volume; 12 cans. But if we measure in square centimetres, one had slightly more volume.

“But why isn’t our answer for the Pepsi box the same as that other group? . . . Oh, we must have measured differently.”

So this spurred a quick discussion of being accurate in our measurements.

Next up I asked them which box uses less cardboard? I said they could assume each side was made of 1 piece of cardboard, and not multiple overlapping flaps. We guessed & then solved:

The group working on the whiteboard pictured above used the formula from their formula sheet to calculate the surface area of the box. This group and others had initially misinterpreted the formula, adding instead of multiplying dimensions, etc. I called groups back to their boards, discussed how to “read” the formulas & asked them to revise their work.

One of our 5 groups tried to solve by calculating the area of each face of the box:

You can see their volume work from earlier at the top of their board. their surface area work is messy but towards the middle you can see them calculating the length x width of each rectangle. On the left they are multiplying those answers by 2. It doesn’t look like they got to the point of adding them together.

I called attention to the 2 different methods used by the class; surface area formulas VS summing the areas of the faces (working with nets).

The rest of class time was spent working on the homework:
Surface area using nets on KhanAcademy
or Surface area (for the 4 students that have already mastered the previous exercise).
I circulated helping students get started on their homework.

In Dan Meyer‘s 3 act math, the 3rd act is checking if we are correct somehow. Lately, the 3rd act in my class has been more about the metacognitive task of discussing their various strategies in solving the problem. Does that make the activity less powerful if we don’t physically check if we modelled correctly after? Perhaps I need to create the act 3 as a photo or video where I lay each box out flat as a net & show the surface area of each. Or should I cut them up to rearrange them into similar shapes to get the visual impact of which one has a larger surface area?

I missed the boat today on having my students generate questions we could solve for this scenario. I should have had a slide in my Pear Deck slideshow at the start asking what Mathematical questions we could ask about these two boxes:

Next time I’ll add that in.

All the materials for this activity are here.

Update (2015.11.10): Last night I bought another 2 drink boxes so that I could cut them up, measure carefully & calculate the surface areas. So at the start of class today (the day after the original activity) we looked at all of our solutions from the previous day to see which group best modelled the correct surface area: 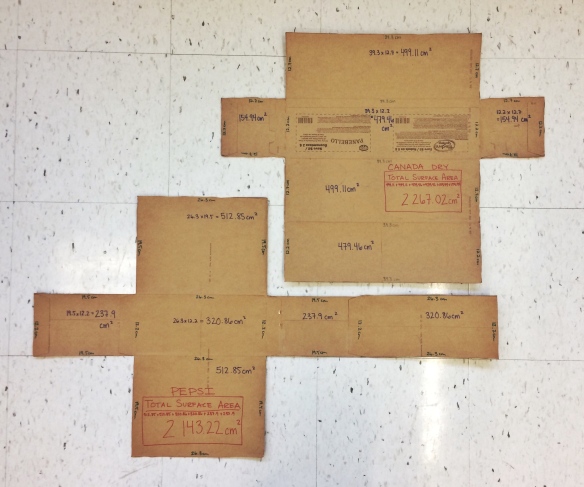